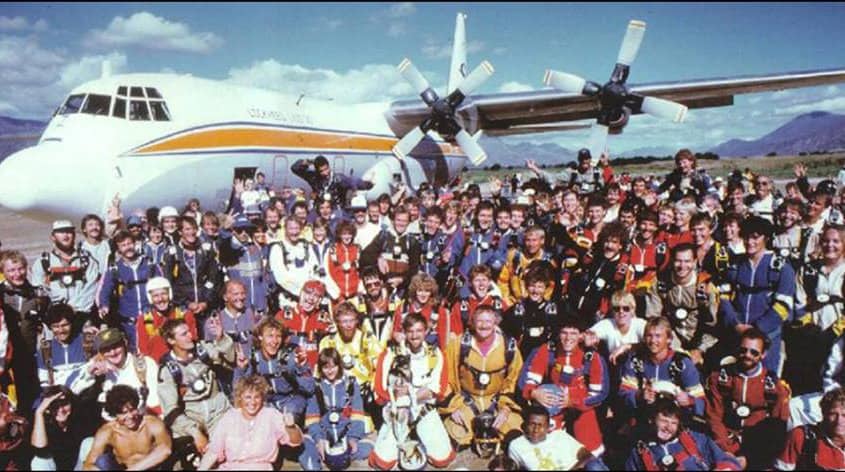 Sometimes people do certain things that give back your faith in humanity. A group of folks down in Cape Town have done just that.
The Western Province Sport Parachute club is stronger than it has ever been before, and for a very good reason. At the moment the club is being run by a group of jumpers which feel that as they are reaping the benefits of the most fantastic sport in the world, the can put some thing of themselves back in.
Most sports are well organised at various levels, but this is mostly done by professionals. Small sports such as aviation have to rely on one or two individuals. The impression given by Cape people is that everybody gets involved in making the club and the sport their responsibility. Sure, the club committee do their organising, without this there would be no club. However, the enthusiasm of the general members is amazing. It is no problem for the students to clean out the toilets for example, as it is little trouble for the committee to take a decision that they would rather lose money than leave the skydivers of South Africa without an easter boogie.
This kind of spirit is seldom experienced anywhere. A previous example was seen at Klerksdorp where the club staged a Hercules C130 jump losing the club money on the ferry. Let me explain: For skydivers the Hercules C130 is the ultimate jump ship. However the costs in running this machine are astronomical and the commitment that has to be made up front for operating the machine is nothing short of a gamble.
The story in the Cape is that Swazi aircraft were withdrawn at the 11th hour and Safair were due to have an aircraft down in the Cape. Problem solved! Fifty or so jumpers carried from DF Malan would pay the ferry. End of Story. Life would be so easy if Murphy hadn’t invented his law. The Cape trip of this C130 was scrubbed as the charter was cancelled. Now picture the committee meeting and their decision. The western province club is not rich, the people running it likewise. Now what? The boogie was bid for a year ago and there is no aircraft. Ferry from Jo’burg is R15000 (roughly 190k in 2016) and the plane is needed. What decision would you make? Their decision was to “GO FOR IT!”
The decision was not the cop out that could have so easily been made. The support that came from the rest of the country has shown that the Cape guys did the right thing. Sure they will lose some cash on the ferry but the goodwill gained and the quality of the facilities will ensure that next year the aircraft will be filled to capacity and the boogie will then be a financial as well as social success.

It’s hard to put it any other way but ” Thanks Guys!”

A Short Note On Boogies