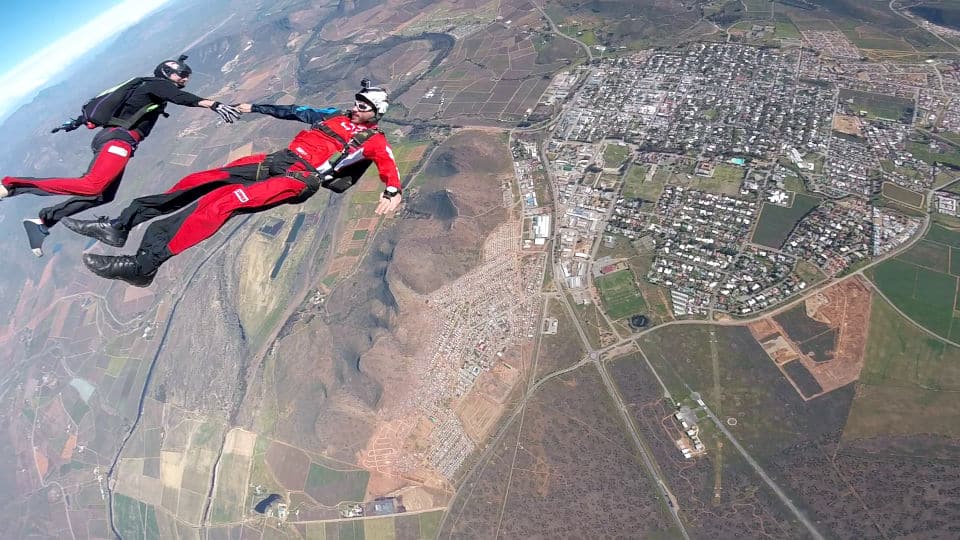 The words ‘let’s go track’ without fail will raise an enthusiastic response from those on the packing mat, particularly if it is close to sunset on a pleasant day. Let’s be honest, they are huge fun but as with most things in life with great reward comes great risk.

Some of the most beautiful and vivid skydiving memories I have are of track dives. Some of the darkest, heart in my mouth close calls I have had in this sport, have been on track dives.

The reason is simple, currency and perception.

Skydivers track after any group jump but it’s to get as far away from each other as they can. This is about getting close, very close. Not something that happens every day.

A track dive is often perceived to be a low pressure, fun, slap together and go jump kind of a thing that happens every so often. It is anything but that. The idea of gathering
up a few diverse mates on a whim, having a chat out to the plane and going for a hop that has all the attributes of a gaggle of geese in flight is hugely appealing. Doing it that way is also hugely dangerous and dare I say it……. dumb.

You are about to embark on a very fluid, fast skydive. Horizontal speeds as well as vertical speeds are high. Altitude awareness is compromised due to the position of your arms and target fixation. Awareness of others in the air around you is limited. Fall rates and forward speeds vary from person to person. You also don’t do this very often, it’s unfamiliar. All of these things can be easily catered for when it goes right, it’s when it goes wrong that things get interesting.

All the speed and energy that was so much fun moments ago now start doing their level best to wreck your day and you with it. Man, it can get busy, scary busy when things go wrong.

So how do we minimise the risk? It’s easy, have a plan…and then dive that plan. From exit to break off to landing, follow the plan. Decide line of flight away from jump run, allocate slots and fly those slots. It’s a great idea to plan your break-off on the ground rather than starting to think about it AT break-off.

What happens if you get left behind? Select your skill levels wisely. Limit the number of juniors or limit the size of the formation and so on. Most importantly, track often and track with the same people. Get to know one another and you will be amazed at how much fun the whole flock of supermen thing can ACTUALLY be.
As an aside I have always said Murphy is afraid of heights and that he rarely ventures above 2000ft. That miserable old Irish bastard seems to make an exception for track dive break-offs. Probably because they usually happen in the late afternoon and by which time he is drunk and braver than usual.

Before you go tracking again.  I have created some briefing guidelines and one or two rules. Go get a copy, read it. Ask questions of your Instructor or JM. Get a briefing, go jump, have fun, survive. (Yes we old farts used to do track dives back in ‘the day’, a lot of them I’ll have you know.)

Let’s be careful up there, and DFU.